4As Visits NASAA & CSC in KC 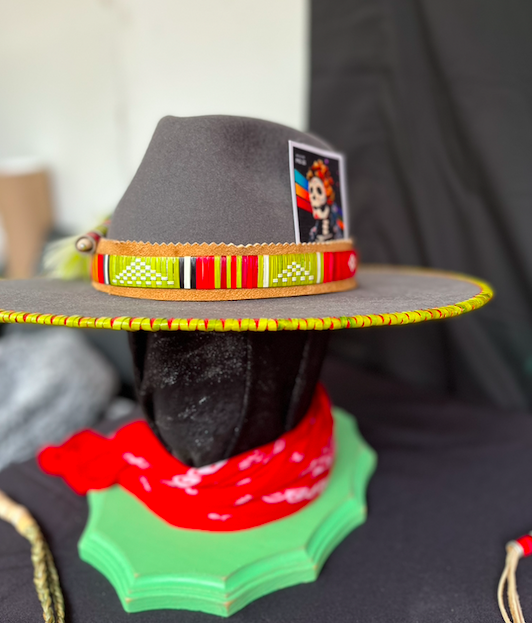 4As Visits SWAIA In Santa Fe

Working as the Communications and Marketing Coordinator of 4A Arts fulfills Alex Carrillo’s dream to bring his knowledge of the entertainment industry to the broader arts and culture world. Born in Oakland, CA and raised in the Tri-Cities of Washington state, Alex envisaged himself exiting generational poverty and eventually working in the music industry.

After high school, without scholarships, funding, or other support to help him reach his goals, he enlisted in the U.S. military in 2013, joining the Army Infantry. Alex received his basic training in Fort Benning, Georgia before being stationed in Fort Drum, New York, where he proudly became a member of 4-31 Charlie Company, the Mountain Division (the world’s best kept secret). In 2015, Alex was deployed to Afghanistan in a classified combat war zone through early  2016.

After his time in the service, Alex returned home to seek his college degree. He enrolled at The Los Angeles Recording School, a division of the Los AngelesFilm School, where he received his associate’s degree in Music Production and bachelor’s  in Entertainment Business.

While still studying at the L.A. Recording School,  Alex landed a publishing deal with Position Music, earning his music a place in the Netflix movie Moxie and in the video game NBA2k22 with his album Locked In.

After receiving his Bachelor’s degree, Alex began working on the business side of the industry, managing artists, performing social and digital marketing, and distribution, among other duties. Alex joined 4A Arts in the summer of 2022, bringing those talents to the nonprofit world.

Director of Research and Operations

Whitney S. Christiansen is a native Kentuckian with an interdisciplinary background in arts, education, and advocacy. She spent nearly a decade teaching secondary English and drama in public schools, receiving a master’s in Interdisciplinary Humanities from the University of Louisville in 2017, where she received that year’s Grady Nutt Award for the year’s most creative directed study project, “Summoned,” an interdisciplinary practicum that combined research on medieval morality plays and Marlowe’s Doctor Faustus with contemporary concepts of costume and set design. From 2009-2015 she was a cast member and later director for the Kentucky Highland Renaissance Festival, where she inaugurated and directed the festival’s teen cast, who developed two stage shows in the commedia dell’arte tradition.

Leaving the classroom in 2019, Whitney received her second master’s degree from Colorado State University in Arts Leadership and Cultural Management, where she began working with Be An #ArtsHero, a grassroots campaign dedicated to bringing COVID relief to Arts Workers (now Arts Workers United.) She was the researcher on staff for AWU’s lobbying team for the U.S. House Small Business Committee’s January 2022 hearing on the creative economy, and for Ovation TV’s The Green Room with Nadia Brown, an educational comedy show about the creative economy that launched in March of 2022. Formerly the general manager of the Center for Music Ecosystems, Whitney heads up 4A Arts’ new research initiative alongside her work managing central operations.

Actor, entrepreneur, political strategist, and father of two, Gavin Lodge comes to 4A Arts with a unique perspective on arts and culture in America. A 20-year veteran of stage and screen, Gavin grew up in suburban Colorado and traversed the country in his work with political campaigns at the senate and presidential levels as well as touring for shows.

After studying international affairs and philosophy at the University of Colorado, he worked as a field organizer in the Iowa Caucus followed by the role of “body guy” to then-candidate Senator Maria Cantwell of Washington State. Politics empowered him to move to New York City to pursue a performing career. Ultimately, he performed in multiple Broadway shows (including 42nd Street, Spamalot, and Priscilla, Queen of the Desert) as well as regional theater, national tours and several network television appearances.

Though he was thrilled every time he stepped onto a theatrical or sound stage, Gavin was equally happy to take on leadership roles in his local union and later his kids’ PTA.

With the Covid-19 pandemic, Gavin jumped back into the political realm, working as a strategist for Bryson Gillette, a minority-owned PR firm focused on politics and public affairs. He also volunteered for Be an #ArtsHero, an arts advocacy movement blossoming during the first few months of the pandemic. During his time with Be an #ArtsHero, he was part of a team that successfully lobbied for a first-of-its-kind hearing on the creative economy in front of the House of Representatives Small Business Committee.

Gavin lives in rural Connecticut with his partner (a composer and orchestral conductor), his TikTok-dancing daughter (who is musically gifted in unparalleled ways) and his soccer-playing son who recently told him “Dad? I’m just not into concerts and theater stuff.” As he told his son, Gavin believes there is much more to American arts and culture than “concerts and theater stuff.” From the video games his son loves to play to low-rider paint jobs to streaming television series while sitting on the couch, Gavin sees American arts and culture as an inclusive, “big tent” spectrum where everyone is an artist and everyone is a member of an audience.